Posted by brian on Wednesday, 08 February 2017 in Cruising News

The market-led proposal to build Brisbane’s new cruise terminal has reached its next crucial benchmark having now received 80 per cent of the required approvals for construction. The final hurdle for the much anticipated terminal will be the approval of State Cabinet, which if successful will see construction begin as early as October 2017, with a view for completion before the end of 2019.

Luggage Point is the proposed location for the new facility for its ability to cater to ‘mega vessels’. The site is in close proximity to the Brisbane Airport and has access to deep water, making for reduced dredging requirements. Any main cargo-related activities are done in a separate area.

Today’s largest cruise ships are over 300 metres in length. This includes marvels such as Royal Caribbean's Allure of the Seas that measures 362 metres, with a passenger capacity of 6296, and Anthem of the Seas, measuring 348 metres and can carry 4095 passengers. 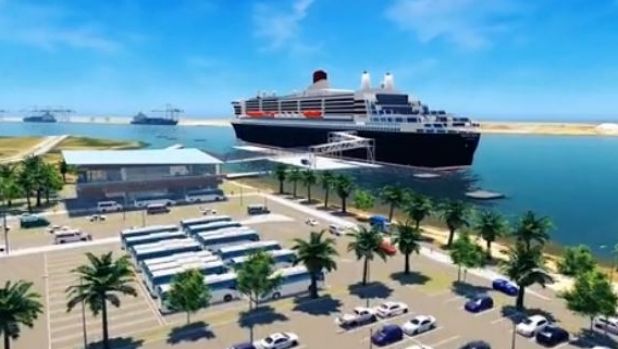 According to the Port of Brisbane, 62% of cruise vessels are expected to be over 270 metres in length come 2020.

Government funding is not required

Taxpayers will not have to shoulder the construction cost. Two of the world’s largest cruise companies - Royal Caribbean International and Carnival Corporation - will spearhead the building of the terminal.

The cruise terminal project has the full support of the cruise industry, with Royal Caribbean and Carnival Cruises partnering with the Port of Brisbane to make this $100 million international mega ship cruise facility a reality.

Once operational, the facility will be able to accommodate more vessel calls.

The Cruise industry is a major player in Australia’s economy According to Business Queensland, Queensland remains Australia’s second-largest cruise holiday market. In 2014, 23.6% percent of the total number of cruise passengers were from Queensland.

Cruising also plays a significant role in Australia’s tourism industry. Cruise markets in Australia saw 20% per annum average growth for the past decade. With the new cruise terminal project, this market share is expected to grow even more.

There will be a dedicated facility to support the influx of cruise passengers, both domestic and international.

Brisbane and Queensland will benefit from the cruise facility

PBPL estimates a $1 billion annual gross injection into the Queensland economy once the project becomes operational.

This tourism infrastructure is poised to potentially triple the size of Brisbane’s cruise industry over the next 20 years.

Brisbane will be utilised as a base port. This means more passengers will be able to start and finish their cruise trips in Brisbane. The project will not only see Brisbane as a major cruise destination, it can also draw increased traffic to tourist destinations in the city and neighbouring regions.

The cruise industry is optimistic about the progress the new cruise terminal project will bring.

Are you looking forward to see the project come to life too?

Let us know in the comments below.

Information supplied by: www.australiancruisingnews.com.au The HOME Of Australian Cruising! and www.dccruising.com.au