Posted by brian on Thursday, 21 January 2016 in Cruising News

AHOY THERE ME SHIPMATES, THEIRS A "LEGO SHIP" IN THE CITY AND REAL ONES AT SEA AS P&O CRUISES CELEBRATE AUSTRALIA DAY.

P&O Cruises Celebrates Australia Day In Style, By Putting Ships On Land And At Sea.

P&O Cruises will be celebrating Australia Day at sea and on land next week, with the cruise line berthing a record four ships in Sydney Harbour – and giving Sydneysiders the chance to build a giant LEGO® ship in the city.

The cruise line has joined forces with the Museum of Sydney to invite LEGO fans to help LEGO certified professional Ryan McNaught as he builds a model of P&O’s Pacific Eden in the forecourt of the museum between 9am and 3pm on January 26.

A model of Pacific Eden’s sister ship, Pacific Aria, is already on display inside the museum as part of its stunning Sydney Harbour Icons with LEGO® Bricks exhibition.

Meanwhile, the real Pacific Eden and Pacific Aria will be on Sydney Harbour next Tuesday, alongside Pacific Pearl and Pacific Jewel, with more than 6500 guests onboard to enjoy the day of celebrations.

This will be the first time P&O has had four ships on the harbour for Australia Day, and follows the expansion of its fleet to five ships last November with the addition of Pacific Eden and Pacific Aria. 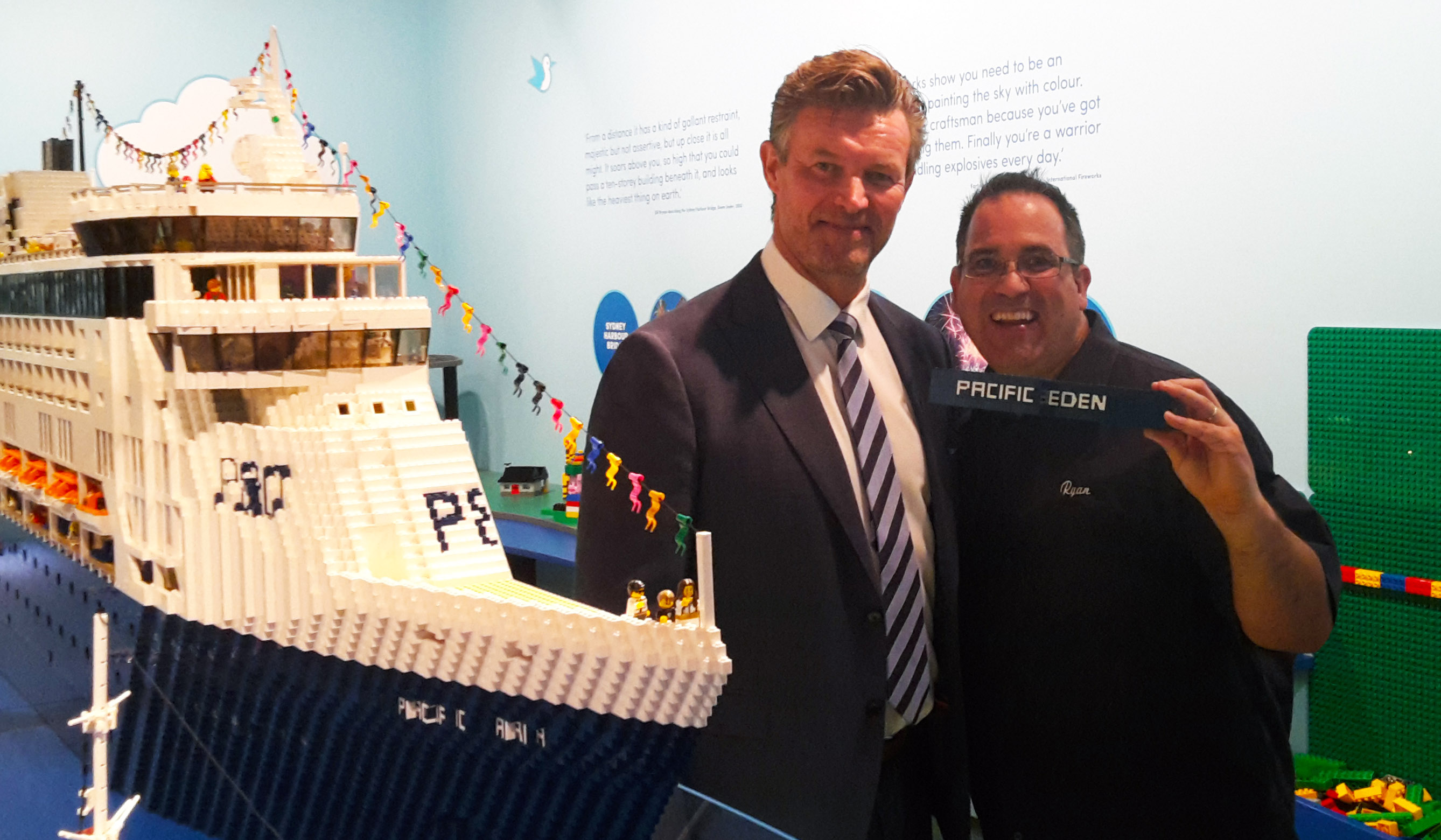 P&O Cruises President Sture Myrmell said the cruise line was pleased to be once again sponsoring Australia Day activities and positioning its ships on Sydney Harbour, while also working with LEGO in such a special way on the day.

“As part of our partnership with LEGO, the kids’ clubs on all our ships feature a range of fantastic LEGO activities which our guests love, so it’s very exciting to be able to bring the action to land for Australia Day with this special chance to make an amazing ship model with Ryan,” Mr Myrmell said.

“We’re also delighted that P&O’s Pacific Aria is part of the Sydney Harbour Icons with LEGO Bricks exhibition at the Museum of Sydney.  Sydney remains one of the most popular destinations in the world for cruise ships and it’s great to see cruising recognised as part of the action and beauty of our harbour in this stunning exhibition.”

The Pacific Aria model took Ryan McNaught 353 hours to build and is made of more than 163,000 bricks.  Weighing in at more than 80kgs, the ship features a range of LEGO miniature figures including celebrities such as chef Luke Mangan, whose restaurant Salt Grill stars on all P&O ships, chasing a pig and David Hoff (formerly Hasselhoff) on the dance floor.  Observant visitors to the exhibition will even find a figure of Ryan in the Shark Shack club on the top deck playing LEGO with some kids.

The Sydney Harbour Icons with LEGO® Bricks exhibition is on display at the Museum of Sydney until July 31, 2016.  For more information visit http://sydneylivingmuseums.com.au/museum-of-sydney